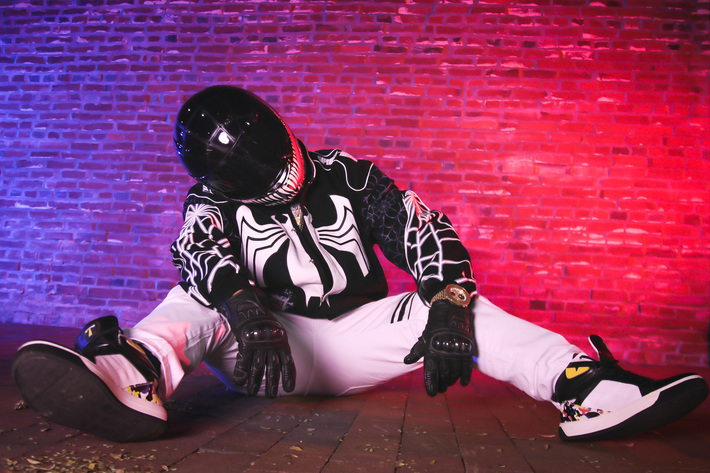 Since his first breath in this world, Channing Von Taylor, a.k.a. Von-T, has had an ambition to achieve whatever he aspires to and dominate everything he attempts.  Now on the path of becoming a respected musical artist, no one who knows him doubts his capabilities. He is a phenomenon who, at a relatively young age, has already been an Army Officer, a military combat instructor, Iraq War veteran, excelled at high school and college wrestling and football, and won acting, rap, step show and modeling agency talent contests.

So it is that on October 17, 2017, Von-T established his own Music Label called Symbiotic Music Group (SMG), and with his unique sound, he is revealing a new alter ego style branding of music.  He states that his music to able to add flavor and unique style to any genre of music. That’s the symbiote, the driving force, of his musical skill.

His label, Symbiotic Music, celebrates the fact that there are two sides to everyone – the business side and the beast side.  For Von-T, the Symbiote is a direct reflection of the beast inside that is needed to get things accomplished when your human physical form can go no further.  Your beast mode should be able to think and operate at a higher level than your normal self and be able to cut any and everything off that is not about the accomplishment of your goals.  You are the host, the symbiote is the attached, and it can accomplish your goals only through you. It is living because of you and therefore it must ensure that you are able to operate BY ALL MEANS NECESSARY.  Prepare your symbiote, and you will always succeed.

Always preparing himself 1000-fold for every task in order to guarantee success, Von-T brings to the music world a huge connection to the streets, a vast and loyal set of friends of the city of Columbus, Georgia, his hometown, and an educational background he has nurtured to understand and express the whole concept of street smarts and book smarts in ways no other artist has ever done before.

His first single “The Plug,” which talks about how even though not labeled a traditional drug dealer he stays close to the streets providing things that people in poverty need to be successful.  The next single released in 2018 is called “Brands,” a song that cleverly ties his singing abilities and rapping skills together as one sound to give recognition to many designer brands and other artists like Migos “Versace” and Lil Pumps “Gucci Gang.” Since then he has dropped Turn off the Lights or TOTL as this is widely popluar name it has developed, Extra-Up, Drippin Wit Cash, and A Star. All singles are part of the first album he is working on called “The Tables Have Turned” “TTHT.” He also has featuted on the Cardiff Brothers single On My Mind, which they are p and coming rising artist as well. He has already made it  to showcases as big as the 2019 BET awards and is continiing to grow.

Born of parents Deanna Marie Lockhart Battle and Alfred Von Taylor with two sisters and one brother, Von-T was blessed with many talents, which he has displayed throughout his life, starting in high school when at the age of just 15, he began editing music from video game systems.  At times he would find himself adlibbing off video game soundtracks instead of playing the games. Among his many talents, he has had many brushes with fame.  Early in his career, he started acting and modeling, but always he had a love for music and an unquenchable desire to make and release his music.  As he studied, he began to understand what people want to hear while also developing his own unique style.

He waited to reveal his style of music until he was sure that he had done enough research to understand his target audience.  It is yet another example of how Von-T takes the extra steps to produce quality over quantity and thus prepare his Symbiote for maximum effect.  He has empowered himself full of educational skills and other attributes as well. Attending American Intercontinental University (AIU) out of Atlanta, GA, to study criminal justice, and later graduating from Columbus State University, his purpose was to understand law in order that he could educate the streets and his neighborhood on how to avoid being a statistic.  He now attends the University of Alaska Fairbanks (UAF) and has taken up business to further his knowledge on how to market his campaign.

Von-T identifies himself with KOVU1278.  Kovu is the deuteragonist of the 1998 movie The Lion King II whose violent tendencies are reinforced by a knack for taking care of himself, as he is physically fit and an able hunter, two features that make way for his more arrogant and cocky side.  Von-T grew up with his crew of individuals who referred to themselves as the Kovus – aggressive, crude, and often looked at by law enforcement as the criminal, but although not criminals, they operate on the brink of breaking laws to accomplish goals, understanding the laws enough to educate the youth.  “1278” simply represents that out of 24 hours in a day, 12 are dedicated to grinding, while the other 12 are for sleep; “7” represents the seven days in a week, and “8” represents all eight eyes of the spider, open and operating at all times.

Intentionally unlike the approach of so many others whom he once looked up to, who became champions in their neighborhoods by becoming glorified rebels, Von-T is on a mission not to rebel but to empower, to exemplify the power of the Symbiote not through sheer force but through dogged determination and preparation.  His toughness and sharpness comes not just from a military background of many years but from his connection to the streets and never-ceasing work on his music to give the people and his fans something fully genuine, powerful, and new.

As he becomes a well-known artist, Von-T’s ultimate goal is to take his family name higher than it has ever been and represent his family name until it is known worldwide.  Although currently unsigned, he will be discovered through his own tireless efforts as he presents a sound and style that cannot be missed. No matter what, everywhere you see him, you will see him “rapsinging” Symbiotic Music Group and KOVU1278.